In As The World Opens I discussed the deeper appreciation I’ve gained for the infrastructure of civilization as a result of The STEMpunk Project. Today I want to reinforce that theme by satisfying a curiosity I’ve long held about a little piece of metal which is so ubiquitous that it’s nearly impossible to have done much tinkering without having encountered one.

I’m talking of course about washers, which you may recognize as these things: 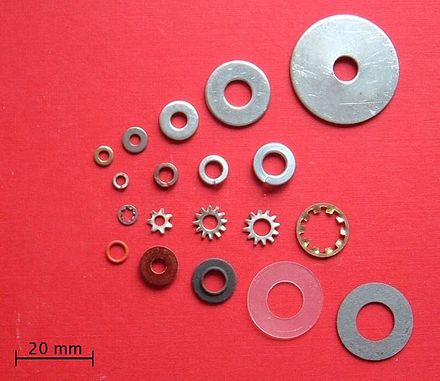 A washer is a small metal disc with a hole in its middle, like a doughnut. They are often found wherever a threaded fastener like a screw or a bolt is being used to bind multiple objects together. On many occasions, after having disassembled something I have dutifully put the washers back in place without having really understood their purpose.

People sometimes use the term “washer” to describe the gaskets used in plumbing to stop unwanted water leakage, but washers do a variety of things besides acting as seals. Perhaps the most important is that they work to evenly distribute force and load.

Imagine that you’re fastening two boards together with a screw. Getting a really tight fit means drilling the screw as far as possible into the board. As the screw head, still turning, comes into contact with the top board a tremendous amount of torque is generated. Many a novice carpenter has watched in dismay as a screw placed near the end of a board causes a nasty split in the wood, introducing a source of weakness. But placing a washer between the screw head and board greatly reduces the chances of such splitting because the torque is spread out over the larger, harder surface area of the metal disc.

Now imagine that you’ve used bolts to fasten a short board to a long board and have hung an equal weight from both ends of the long board. Where is all the resulting downward force concentrated? In the small area covered by the bolt as it exits the board! With a small amount of weight this isn’t going to be a problem, but it can become one as weight increase. The most common solution I have seen is to place a washer on the exit side and to use a nut to secure it in place. Here, the washer is both distributing the load of the weights and distributing the torque of the nut as its being tightened into place.

Why is it necessary to fasten things together so tightly that we risk splitting a board? In part because forces that aren’t of much consequence when making a bookshelf become extremely important when building a deck or chassis. As a vehicle runs it vibrates, and any bolts in the engine or body will begin to shake loose. As a deck weathers multiple seasons the wood of which it is made expands and contracts, compromising the integrity of the joints holding it together. If this shifting is extreme enough something important might break loose, causing injury or death.

With this in mind there are washer variants designed to keep even more tension on fasteners and joints. Star washers are built with teeth which bite into their point of contact, making them harder to dislodge. Belleville, wave, and curved washers all deform slightly when they are tightened down, increasing the pressure at the joint in a manner similar to how a compressed spring might.

This isn’t all that washers do. They can also be used as a kind of adapter whenever a bolt is too small for a hole, as spacers if a bolt happens to be too long, as boundaries between two metals like aluminum and steel whose contact will result in corrosion, and as electrical insulators.

So don’t make the beginner mistake of assuming that you can leave the washers off. They really are important!

One thought on “The STEMpunk Project: The Humble Washer”